Once upon a time, when we first started planning our adventure, one of the things on the bucket list was to see Lake Como.  A friend and prior co-worker of Kirk’s was from there and always made it sound wonderful.  She posts pictures and they looked like someplace I want to see.  Since we need to go via Milan, we decide to stay there a couple days.

Kirk decides he really wants to see Leonardo da Vinci’s “The Last Supper” which is a very popular tourist attraction in Milan. After doing some extensive research, we discover that you MUST PURCHASE TICKETS AHEAD. We go through Viator to purchase, but there are limited times available, even this far out. Since we have already purchased our plane tickets, we can see it will be close, but they have an opening at 2:30 pm on they day we arrive.  Our flight is due to land at the Malpensa Airport at 12:30 pm.

Our host, Carmen, arranges for a cab to pick us up in the morning to take us to the airport. Let me just say, the train station in Malaga is much more pleasant than the airport. We flew with Easyjet and it was a good flight and we landed a few minutes ahead of schedule.  Now, to find the train station.  It is a long walk to the station, but we go into the ticket office and purchase two one way tickets from Malpensa to the Central Station, which departs at 1:07 pm and it takes approximately 55 minutes.  The train is comfortable and it is a nice trip and we arrive at the Central Station after 2:00 pm.  We realize we are not going to make the 2:30 pm tour, but Kirk wants to try.

Kirk has downloaded offline maps, but they don’t work 100% of the time. We head the wrong direction, but only for a couple blocks.  Even though this is a minor setback, we reach the Marconi Hotel and it is after 2:30 pm.  We head to our room and unpack.  After we unpack, Kirk decides he wants to go the the Santa Maria delle Grazie to see if there is a way to get in.  From all the blogs, feeds and comments I have read, NO ONE has posted that they were late and got in.  In fact, there are many who were late and and were refused entry.  The instructions clearly state you must be in the que 20 minutes prior to your tour time.

We head back down to Central Station to pick up our Milano Card and Metro Pass that came with the purchase of our Last Supper Tickets.  I stop at the front desk to ask their opinion and they felt it was worth a try, which was encouraging.  The signage at Central Station is very confusing, but we finally find the Tourism Office and pick up our stuff and head to the metro. When we finally arrive at the ticket office for the Last Supper, it is 8:00 pm.  We walk in expecting nothing but disappointment. A lovely young lady greets us and I begin our request for mercy AND mercy was granted! Praise Jesus! She told us there was a tour starting in five minutes and handed us our tickets.

They only allow a limited number of people in at a time to see the paintings. You que in a glass room roughly eight feet by eight feet with the other 18 people.  You can see another room with 20 people ahead of you. Their door opens into another room and they disappear.  Our door opens into that room and we wait 15 minutes. The door opens and we enter the rectory of the church where we see “The Last Supper” painted on the wall and it is larger than I imagined. We also see that at sometime in history, the room was painted with a whitewash, covering some beautiful fresco work, which is now being restored. Leonard’s painting is filled with emotion in his interpretation of the appostiles’ reactions when Jesus reveals that he will be betrayed.

At the opposite end of the room is another beautiful painting of the same time (1495) by Giovanni Donato da Montorfano entitled “The Crucifixtion.” The church itself is an UNESCO World Heritage Site, built in 1463.

After that, we jumped on a trolley and got lost, which is a great time to look for a place to eat.  We had some delicious pizza and an IPA beer and then jumped on the metro.  Since we had to change lines at the Duomo stop anyway, we decided to pop up and take a look. OMG! We popped up at the base of the Duomo and it was amazing! It has to be the most beautiful building we’ve ever seen! Behind us is the Piazza del Duomo filled with people and on the other side is the Galleria Vittorio Emanuele II (1865) filled with high end shops like Prada, Louis Vuitton, and Vercace. It is late now, so we will make our way back to this area tomorrow! 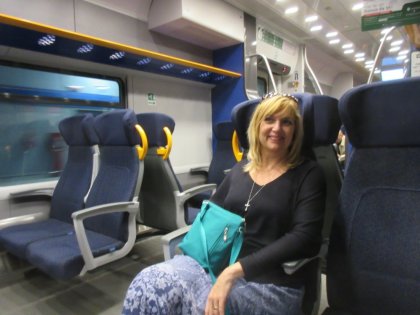 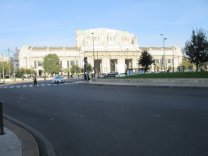 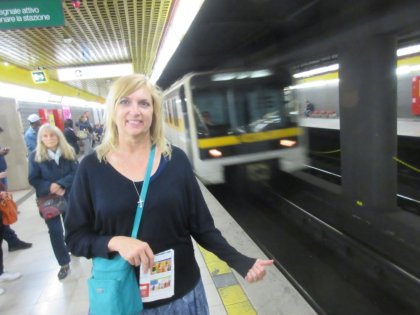 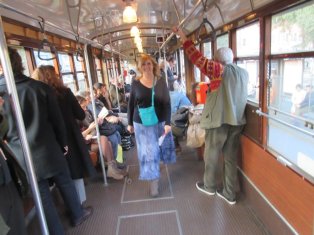 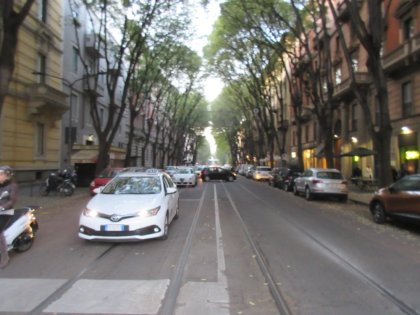 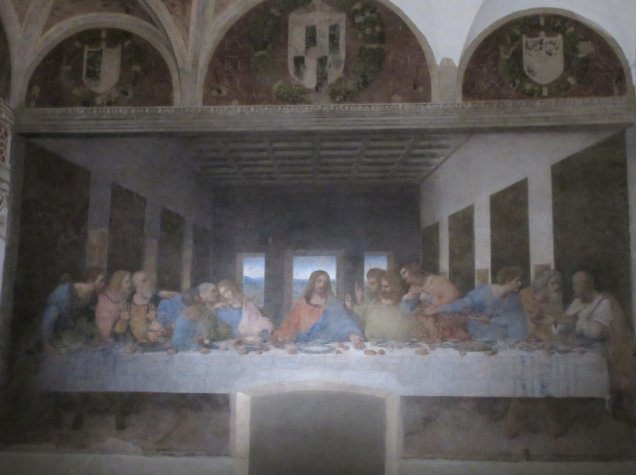 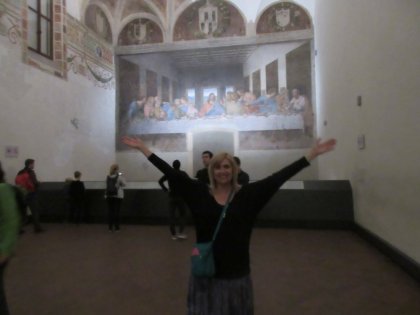 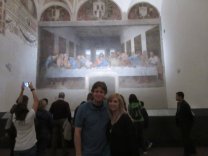 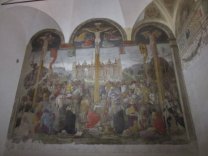 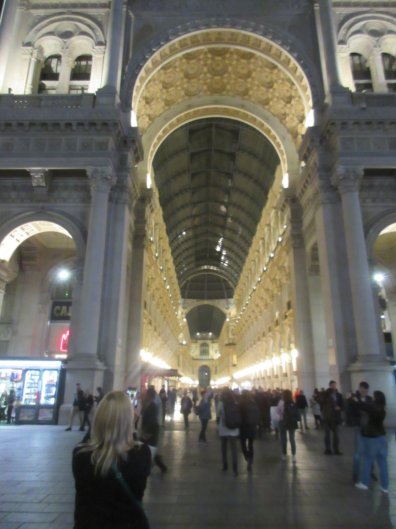