We would like to thank Spain and the city of Madrid for the parade!  It was complete with a military air show and attended by the Royal Family, with representation from every branch of the military, out in full regalia!  We felt SO special!

OK…so it is because October 12th is a National Holiday in Spain.  Over the years, the festival has changed, but Fiesta National de Espana (or Dia de la Hispanidad) commemorates Christopher Columbus’ discovery of the Americas in 1492.  The king of Spain supervises the raising of the flag in the center of Madrid, after which the king and the Prime Minister lead a military parade.

It was cool to see everyone waving the flag of Spain and the thousands of people lined up to view the parade, in spite of the tensions with Catalonia. Later, as we walked through the streets and plazas, we could see flags hanging from the windows and balconies everywhere.  What a glorious way to begin our adventure in Madrid!

On a sad note, one of the jets that flew over crashed upon returning to the air base and the pilot did not make it out of the plane before it crashed. Our thoughts and prayers go out to the pilot’s family and his fellow pilots.  Thank you for your service to your country.

ADDITION TO POST:  The celebration continues! We went out again just before 10 pm and there were thousands out having fun on every street and plaza we passed.  We happened to walk to Palacio Real where they were doing a light show and concert.  The light show was against the palace walls and the music was beautiful guitar music.  See pics below. 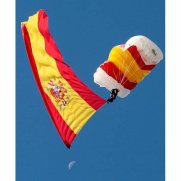 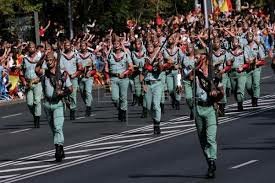